Home Health What are poppers? Are they safe and where are they legal?
Facebook
Twitter
Google+
WhatsApp
Email 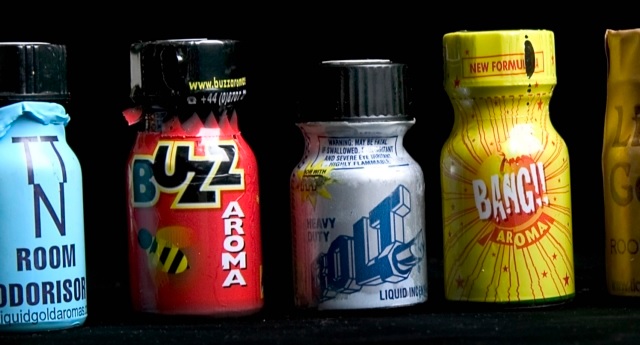 Alkyl nitrites, more popularly known as poppers, are a popular party drug among the LGBT+ community.

“Poppers” is the slang term for alkyl nitrites. It is a chemical drug that is often inhaled for euphoric and sexually productive effects.

Originally used for chest pains, alkyl nitrites were then used recreationally during gay disco in the 1970s.

They are usually sold in small bottles in liquid form that produces vapour for people to inhale.

Partygoers use it for sex as well as the pleasurable high, though some people find it to be disorientating causing a feeling of dizziness and nausea.

Are poppers safe or dangerous?

While alkyl nitrites are technically legal in most places, they do come with risks and can have extremely dangerous side effects, much like viagra.

Poppers increase blood pressure which can lead to strokes and heart attacks. If inhaled excessively, the chances of a drop in blood pressure and fainting are higher, along with vomiting and struggling to breathe.

Studies have also indicated that it could cause other lasting damage to one’s eyesight, sexual performance and immune system.

Where are they sold? Are they legal or illegal?

Depending on where you are in the world, it may be easy or difficult to purchase bottles of alkyl nitrites.

It’s illegal to sell poppers in Australia as inhalants and in 2018, the government motioned to deem alkyl nitrites be regarded as dangerous as heroin and cocaine. The LGBT+ community felt this was a step backwards for gay rights.

The UK almost banned poppers but they ditched the plan in a government u-turn.

However, sales cannot be advertised for human consumption.

Poppers can be bought in clubs, sex shops and online.

As of 2013, sales of alkyl nitrate products are banned in Canada. Selling them can lead to a fine and even prison time.