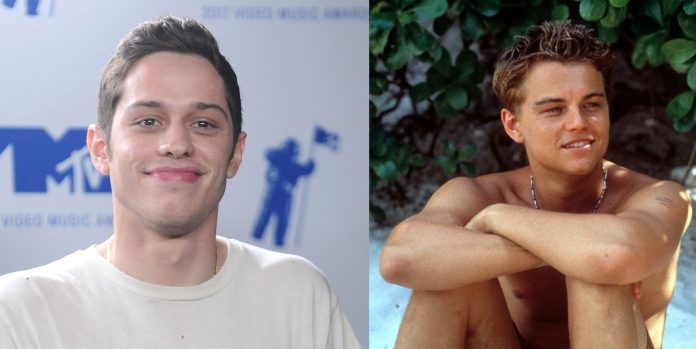 The SNL star, who previously dated Ariana Grande, spoke about his admiration for DiCaprio in an interview with 13 Reasons Why star Tommy Dorfman for PAPER magazine.

In a discussion about his status as a surprise sex symbol, Davidson revealed: “I used to jerk off to Leonardo DiCaprio… Uhh, like his acting.”

He added: “I used to have a HUGE crush on Leonardo DiCaprio.

“I had this huge poster of him from The Beach in my room, and there used to be, like, Leo ‘love books’.

“There were love books and I had all of them. He was the coolest.”

He added of his later encounters with DiCaprio: “I’ve met him twice and I’ve just shaken hands and run away fast.”

Presumably he washed his hands first.

Pete Davidson was first person in his family with gay friends

Davidson also revealed that he was “the first person in my family to have gay friends” because his relatives were “raised Catholic and old-school.”

He added: “Well, nothing’s cooler to me than seeing my friends crush it. I also have the most talented friends ever.

“And I think my friends are a good reflection of me… anybody that I f**k with is sweet and morally sound, you know?

Dorfman compared it to the way “some pop stars use gay people,” to which Davidson replied: “I really feel like I have to be careful when I’m saying this, but I do feel like a lot of women in entertainment use gay men as props.