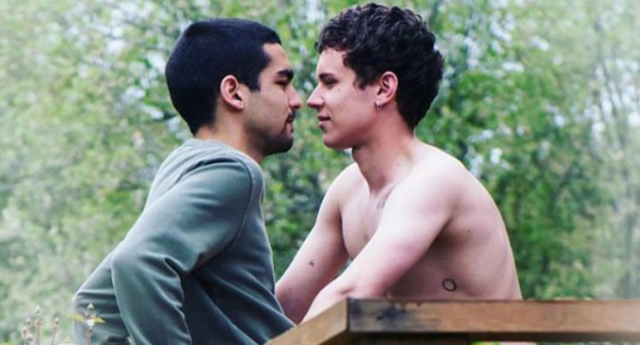 On Saturday 13 October, the streaming service took to its official social media account to share a still from one of its latest hit shows, the Spanish drama series Elite.

The image features characters Omar (Omar Ayuso) and Ander (Arón Piper) in an intimate embrace, seeming like the pair are about to share a kiss.

Alongside the caption, “The only thing I want is to be with you,” Netflix hashtagged the budding couple’s ship name that has been created by fans of the show: ‘Omander’.

While Netflix is clearly fond of the new fictional pairing, some of the provider’s 11 million followers weren’t so happy to learn that its latest outing features a gay couple.

Several comments were curious as to why Netflix felt the need to ‘include homosexual relationships’ in all of its original content, while others got a little nastier. One user even wrote: “All gays are going to hell yall push this s**t to corrupt the world gays are nasty & all of them going to hell.”

Other comments include, “Everyone is entitled to their own opinions, I personally believe same sex is not the natural order of God and goes beyond everything he believes in, but hey people do it any way and defend it I ain’t judging noone that’s God’s job to judge all of us #leaveeverythingtogod,” and “wtf Netflix and their stupid liberal agenda.”

Others read, “Homosexuality equals death,” “Time to delete my account,” and “I don’t watch gay shows sry god created men and woman together not men.”

Some even tried to offer advice, saying: “What if you just tried to stop being rainbows? Like not stop, but try to, I swear god will love you. Please just try to focus more on YOU and instead of dating ur same sex date the opposite sex.

“I am open minded but I am against rainbows.” (We can hear your eyes rolling from here).

But it was a response from on particular Instagram user that caused Netflix to snap back. Responding to a reply that said, ‘Get the f**k off my Instagram. Not ever[y] person on the planet is gay. You are trying way too hard,” it showered the comments section with several rainbow emojis and claimed it “couldn’t read [the] comment while surrounded by all these rainbows.”

And if that wasn’t enough, just a couple of hours later, the social media team behind the account posted a still from Atypical characters Casey and Izzie from the penultimate episode in the show’s second season.

While the pair haven’t been explicitly linked romantically in the show, fans have been picking up on their chemistry for a while. In the season finale, they hold hands in a scene that makes it pretty obvious there’s something more than friendship on the cards for these two.