A leading Malaysian politician has blamed LGBT+ people for a earthquake and tsunami that struck Indonesia last month.

“We look at the situation in Malaysia, we are worried because we know what happened in Palu recently where there was an earthquake and tsunami. It was reported that there were more than 1,000 members of their community who were involved in such [LGBT] activities,” he said, according to a translation in Malay Mail.

“As a result the entire area was destroyed. This is the punishment of Allah. My question is whether the Malaysian Islamic Development Department’s programmes [to rehabilitate the LGBT] are successful because data shows that in the middle of the year more than 1,000 [LGBT] joined these programmes.

“We need to ensure that Malaysia and those who are against LGBT are spared Allah’s punishment.” 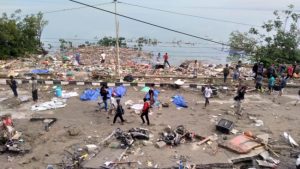 People walk past covered dead bodies a day after an earthquake and a tsunami hit Palu, on Sulawesi island on September 29, 2018. (OLA GONDRONK/AFP/Getty Images) Malaysia has a poor record on LGBT+ rights, where homosexual activity remains illegal ever since a ban on sodomy was introduced under British colonial rule.

In 1994, the government also made it illegal for LGBT+ people to make appearances in the state-controlled media.

A 2015 Human Rights Watch report noted that “discrimination against lesbian, gay, bisexual, and transgender (LGBT) people is pervasive in Malaysia.”

In September, LGBT+ campaigners criticised the Malaysia’s judicial system after two women were caned for having lesbian sex. The women, who are 32 and 22, had pleaded guilty after Sharia enforcement officials in the northeastern state of Terengganu found them having sex in a car.

In August, police raided a gay bar in the country’s capital of Kuala Lumpur, which authorities said was carried out to “mitigate the LGBT culture from spreading into our society.”