Singer Lily Allen has opened up about why she slept with female escorts while on tour in 2014, after the release of her third album Sheezus.

On Sunday (September 2), Allen posted on Instagram about how she had used the escorts when she was on tour, explaining that she had discussed this in her upcoming autobiography My Thoughts Exactly.

The book is scheduled for release later this month, but Allen said that it had been leaked to The Mail on Sunday, which she said was planning to run a story on how she had slept with female escorts.

Now, in an interview with Ten’s The Project, Allen explained that she slept with the escorts at a time when her marriage with then husband Sam Cooper was breaking down and she missed her children

“It’s not like steamy, raunchy—although that’s what the tabloids have made it out to be, as a ‘lesbian prostitute sex romp,’ which I guess it was in a way,” she said, according to the Evening Standard.

She added: “It was more about a period of time that I was feeling incredibly lonely and sort of at my wits end.

“It’s not really a salacious sex story, it’s more about hotel rooms… and being on my own and being very far away from my kids and my husband.”

The star continued: “I’m a big advocate for having no shame. In retrospect, I know what was going on. I think I had postnatal depression and my marriage was deteriorating and I found outlets to deal with all of that.”

Allen posted a picture of herself on Instagram on Sunday, writing: “Sooo, in my book ‘My Thoughts Exactly’ (out on 20th Sept) I detail some stuff from my dark days, around the Sheezus era.

“I slept with female escorts when I was on tour, cause I was lost and lonely and looking for something. I’m not proud, but I’m not ashamed. I don’t do it anymore.

“The Mail are gonna run with the story tomorrow cause someone leaked it, and they’re bound to make sound worse than it was. Just wanted to give you Er, the ‘heads up’!”

The “Smile” singer, who has been outspoken in her support of LGBT+ people and refugees, has often been a target of British tabloids.

Last year, The Daily Mail attacked her for quoting a poster protesting President Donald Trump, which read “Fags Against Trump.”

Allen addressed the negative tabloid headlines in the first single of her latest album, No Shame, which came out in 2018, four years after Sheezus.

In that time, Allen split up and later divorced her ex-husband Sam Cooper, with whom she has two daughters, Ethel and Marnie. While promoting No Shame, the singer discussed being unfaithful to Cooper and the difficult time she went through following the release of Sheezus.

“I’d wake up on a tour bus in the middle of Wisconsin and be so hungover. I cheated on my husband. All I wanted to do was be with my kids. I wasn’t even making any money,” she told Vulture in May.

Several of the songs on No Shame also hint at Allen’s difficult time, including the song “Everything to Feel Something,” whose lyrics say “I’ve tried everything to feel something—but nothing.” 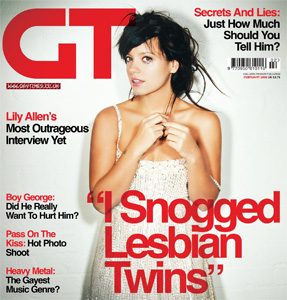 In 2009, she appeared on the cover of Gay Times with under the headline “I Snogged Lesbian Twins,” referring to the time she had a three-way kiss with two same-sex siblings.

“That’s the only time, but I have lesbian dreams a lot,” she told the publication.

What do you think about Lily Allen tell us in our comments below.