The Tel Aviv monument honors the thousands of LGBTQ people persecuted by the Nazis.

Vandals spray-painted “Death to LGBT” on the memorial, located in Meir Park near the Israeli city’s LGBTQ Community Center.

The monument is shaped like a pink triangle, representing the symbol LGBTQ people were forced to wear on their uniforms in concentration camps during World War II.

An inscription on the memorial, which was completed in 2014, reads, “In memory of those persecuted by the Nazi regime for their sexual orientation and gender identity.” 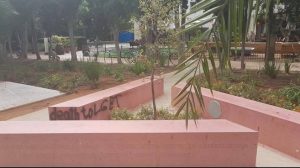 It’s estimated that about 100,000 LGBTQ people were arrested in Nazi Germany, and as many as 15,000 were incarcerated in concentration camps.

“We will continue to act and protect members of the community as we have done so far,” Huldai wrote on Facebook. He later posted a photo showing that the monument had been cleaned.

Etai Pinkas, chairman of Tel Aviv’s LGBT Community Center, says the defacement is a reminder that LGBTQ people must “continue to fight for our security and equality.”