Jaden Smith has hit back at people who criticise him for wearing a dress.

The actor, singer and 19-year-old son of Will Smith and Jada Pinkett Smith has a long history of dressing in whatever way he wants, regardless of what gender stereotypes say he should be wearing.

And he has a long history of defending himself from those who would tear him down for going against the grain.

In his latest attack on those who would have him conform to strict binaries, he had a simple message.

“If I Wanna Wear A Dress, Then I Will, And That Will Set The New Wave,” he wrote on Twitter.

In 2015, the star of The Karate Kid responded after he was photographed out and about wearing skirts and dresses, saying: “Went To TopShop To Buy Some Girl Clothes, I Mean ‘Clothes’”. 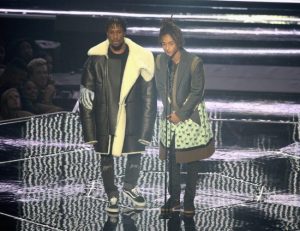 He added: “That Moment When You’re Wearing A Dress With No Pants And You Swerve Way Too Hard.”

The teenager expanded on this by explaining: “Einstein didn’t really like to change clothes because he had too much other stuff to worry about and I’m the same.

“All black is pretty much my go-to look.

“If somebody is just wearing something for the blogs, that’s really sad because they’re not living for themselves, versus someone wearing a kimono who’s having an awesome time.

“I really look to see, do you care more about what other people think, or are you having fun?”

Jaden, who lent his support to the March For Our Lives campaign over the weekend, even wore a dress to prom.

For his part, his dad Will Smith has said that he “doesn’t give parenting advice”, but that he wants them to “be who they are”.

He added: “First of all, I don’t give parenting advice per se, because it’s such a unique task. The greatest human task is to render a human being into the world”.

“What I do with my children, that I feel that the greatest gift that I can give my children is the freedom to be who they are.

“Jada and I are very serious about finding what they are, and encouraging them to be what they are because you can never be happy being what you’re not.”

Jaden wore nothing but a skirt for Korean Vogue in 2016.

And the teenager was unveiled as the new face of Louis Vuitton womenswear in the same year.