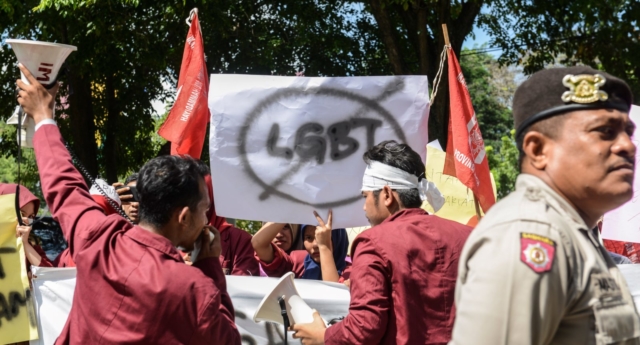 Two Indonesian men have been arrested after being linked to a Facebook page that helps gay people arrange meet-ups.

Officers reportedly raided the property of a man, identified only as IS, in Batununggal on Friday 19 October. They confiscated five mobile phones from the premises and 25 condoms.

The social media profile – named Gay Bandung – is said to have 4,093 active followers. It is believed to be used by both teenagers and adults.

According to Channel News Asia, a senior officer in the province of West Java claimed that the individuals – who are believed to be a couple – were facilitating the organisation of sex services and charged with breaking electronic information law by creating and sharing pornographic content.

The page has seemingly been deleted.

It is unclear whether it was Brata that made the additional comments. Regardless of their identity, they also detailed how the pair face a maximum sentence of six years’ imprisonment and a maximum fine of one billion rupiah (US$66,000).

This isn’t the first time that those sharing a display of pro-LGBT+ attitudes online have been condemned in Indonesia recently as hostility towards gay people seemingly increases. Around two weeks ago, a Facebook page run for young queer people in Garut caused education principals to urge the banning of LGBT+ community presence in schools.

More recently, homophobes were calling on users of ride-hailing app Go-Jek to boycott the company after it demonstrated its support for the LGBT+ people on National Coming Out Day (Thursday 11 October).

Six days later, the Cianjur regency administration instructed nearby mosques to preach about the dangers of being LGBT+ and HIV during prayer services. Despite homosexual sex not being criminalised in areas other than Aceh, the Southeast Asian nation is widely religious and known to be conservative when it comes to such subjects.

Indonesia recorded 46,357 new HIV infections in 2017, with nearly a quarter of those among men who have sex with other men, according to government and UNAIDS data. Other groups included sex workers and intravenous drug users.

For more great news stories click on the banner at the top of the Out Down Under home page and be part of our newsletter.