The director of Call Me By Your Name has defended his decision to cast straight men in gay roles, saying he “wouldn’t be able to cast” the film if he was restricted to gay actors.

Luca Guadagnino’s acclaimed gay coming-of-age film tells the story of a romance between 17-year-old Elio and graduate student Oliver, played by Timothée Chalamet and Armie Hammer – a notable lack of LGBT+ representation in the lead roles of a seminal gay love story.

The idea that a marginalised minority should be given the opportunity to portray themselves on the big screen was dismissed by Guadagnino in a new interview with The Independent.

“I read too much Freud to be taking seriously these kind of critics, meaning that I honestly don’t believe I have the right to decide whether an actor is straight or not,” he said.

“Who am I to know what somebody is thinking of himself or herself within themselves? Yes, Armie is a straight man with a wife and children and the same can be said of Timothée. But do I ask them to swear on their sexuality, on their identities, on their desires, before I cast them? I don’t!”

He added that to do so would be “dull and a little preposterous,” and claimed that he’d be unable to cast the film if he was limited to gay actors.

“If I have to cast what people think is the real thing for a role, I wouldn’t be able to cast. I cannot cast a gay man to play Oliver. I have to cast Oliver to play Oliver because the identities of gay men are as multiple as the flowers in the realm of earth,” he said.

The Italian director also addressed criticism from Call Me By Your Name‘s screenwriter James Ivory regarding the lack of full-frontal male nudity in the film.

“Nobody who knows my work can say to me with a straight face that I’m shy about male or female or other gendered nudity,” Guadagnino said.

“So, the critique or note that James gave was, in a way, devoid of pragmatism or a relationship with the movie itself. My question to him is does this movie need full frontal male nudity. I don’t think so. It doesn’t.”

He said he didn’t share Ivory’s vision of “expositionary kind of nudity” for the film, adding: “I think James was a little tone deaf about the situation.” 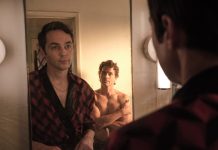